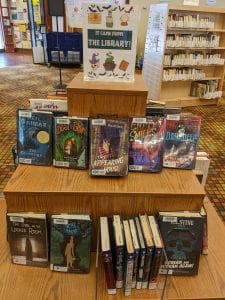 When I was a child, there was a lot to be scared about. I had been sick from birth, so hospitals were a regular setting in my young life. I also had problems with bullying, which made me afraid to go to school most days. Throughout my childhood, my mother would describe me as a "worrier." I was that kid who was always biting my nails and looking nervously around every corner. When I read (and became obsessed with) Nancy Drew mysteries in third grade, I identified with the scaredy-cat Bess Marvin rather than Nancy herself.

You would think that horror would be the last thing I should read. But, as it turned out, it was exactly what I needed. I'd already fallen in love with mysteries but, by fifth grade, I was reading scary stories in earnest. By middle school, I was devouring Stephen King. As frightening as those stories were, they truly soothed me. What the characters in horror stories were going through helped me put my own fears in perspective. They made me feel braver, more prepared, and--yes--even calmer!

In a book (the name escapes me) I read as a child, a character is accused of being afraid of the dark. The character responded with a line that has stuck with me for years. "I'm not afraid of the dark. I'm afraid of what it's hiding." When I read horror stories, it gave a name and a face to all of those things in the dark. It demystified monsters and showed a way to defeat them. Horror may not be the answer for every child. But when I see a kid come into the library, eyes lit up, asking for the scariest book I have--I know exactly what they're looking for.

I had the honor of speaking to two amazing middle grade (ages 9-12) horror authors who are both up and coming in the genre. If you love horror, or have a kiddo that just can't put down a scary story, check out my interview with Ally Malinenko and Lora Senf!

1. Hi, Ally and Lora! Can you tell us a little about what drew you to writing middle grade books? What made you want to write for this age group in particular?

Ally: First and foremost, middle grade books were the books that made me fall in love with reading when I was a kid. But, in my writing journey, I started with young adult. I wrote a science fiction YA book all about chess. Yes, chess. We went on submission and the book died. Literally every publisher said it was really middle grade because the main thrust was a girl trying to save her grandfather. My agent asked me if I wanted to revise it to middle grade. I did and honestly the process BROKE me. I reached a point where I didn’t want to write anymore. The only thing that stopped me from quitting was the question, “what books did you love the most when you were a kid?” The answer was middle grade horror. Then I sat down and wrote Ghost Girl in six months. It was those horror stories from when I was a kid that stayed with me, and I think that’s true for a lot of readers.

Lora: I’m with Ally on the importance of middle grade books in building lifelong readers. As grown ups, when we think about the books that matter most to us, often they’re books we read at the “middle grade” times in our lives. Those were the books we read until the covers fell off. I've read so many incredible books as an adult, but the books I read when I was young are the ones I go back to time and again. Plus, kids are basically the best possible audience to write for–they’re smart and brave and still believe maybe magic might just be real.

Middle grade horror in particular is really important to me. As long as I can remember, I’ve been deeply anxious. I know now what anxiety is and how to deal with it, but growing up in the 80’s no one talked to children about anxiety, so I was just a weird kid. I was afraid of everything EXCEPT scary books and movies and tv. Those were the places I practiced being brave. I wrote Evie, the main character of The Clackity for scared but brave kids (and those of us who used to be those kids) who deserve to see themselves as heroes.

2. You both seem to be very passionate about horror fiction! What book or books made you fall in love with the genre?

Lora: My first favorite author was John Bellairs. Bellairs wrote gothic horror for kids–he’s probably best known for The House with a Clock in its Walls. I read his books over and over again. Bellairs introduced me to horror and I never looked back. I was starting to read Ray Bradbury at about the same time and fell in love with his gentle and poetic version of scary stories. Then I jumped to Stephen King (I read Cujo when I was way too young thanks to a lenient babysitter) and my fate as a diehard horror fan was sealed. Add to that, my favorite shows as a kid were things like The Twilight Zone, Night Gallery, and Alfred Hitchcock Presents. I guess I’m just a natural born horror nerd.

Ally: I was also drawn to Stephen King at a young age. I used to sneak into my oldest sister’s room and read a chapter at a time off her bookshelf. As a kid, it was all things Halloween. I remember non-fiction books about the holiday and the symbols that I was obsessed with. Also Mary Downing Hahn. But the biggest one for me had to be Scary Stories to Tell in the Dark. Those drawings still live rent free in my head.

3. I was a kid that gravitated to horror as a child, finding it oddly calming. Do you think horror books can have a positive impact on kids beyond entertainment?

Ally: I think one of the biggest disservices we do to kids is assume that they can’t handle things. Let the horror kids have their books! The thing I like about middle grade horror is that it’s “safe scary.” I make a deal with my readers. I will take them into the dark scary woods but I will bring them back to the light. It is horror with heart and hope. I also think that horror is a good place to talk about deeper issues. I talk about grief and death and illness in my horror books. These things happen. Kids know this. We need to be honest with them and, truth be told, I think horror is honest. It trusts kids to make it. It knows they will survive the night. And also, look, we all know as adults that some day a monster is going to show up in our lives. Horror teaches kids how to survive that monster.

Lora: Like Ally, I enter into a sort-of-contract with my young readers and their adults. It goes something like this: “I’m going to take you on an adventure. It might get scary at times, and bad things will happen along the way. But if you stick with me, I promise things will be okay at the end. Maybe not perfect, but they’ll be okay.”

I don’t have to tell anyone–the world can be a really frightening place. Horror–especially age appropriate horror–provides young readers with a safe place to practice being brave. Kids can face scary things and close the covers of the book if it gets to be too much for them–then they can return to the story later (or not at all). It puts kids in control of what scares them and that’s empowering. Many kids can read adult horror (I certainly did), but they deserve to have genre fiction written for them.

4. As a librarian, I’m always getting kids asking for spooky books. Tell us a little about your books (current, past, & upcoming in horror):

Ally: Ghost Girl is the story of Zee who, at 11, discovers she can see ghosts like her mother before her. When a storm comes to town (and, with it, a new creepy principal who has the ability to manifest everyone’s deepest desires) Zee must team up with her best friend Elijah and her bully turned buddy, Nellie, to find out what is going on and save her family.

This Appearing House is the story of Jacqueline Price-Dupree who is on the cusp of her 5-year anniversary of a cancer diagnosis. Jac is feeling pretty anxious and with a few falls and shaking hands, she’s starting to worry about a relapse. When a house appears at the end of the cul-de-sac, Jac is worried it’s a hallucination. When she takes her best friend Hazel to see it, they are bullied by some neighborhood kids to go inside. Once inside, they cannot get back out. Chased from room to room by terrifying creatures, Jac starts to realize the house has a purpose and the only way out is through.

I’m also currently working on a witch book about family and sisterhood and feminism which is also a very period-positive story.

Lora:  The Clackity is an upper-middle-grade horror story and the first of three planned books in the Blight Harbor Series. In The Clackity, nearly-13-year-old Evie Von Rathe lives in Blight Harbor–the seventh-most-haunted town in America (per capita)–with her Aunt Desdemona, the local paranormal expert. When Evie’s aunt disappears into an abandoned abattoir at the edge of town, Evie learns Desdemona was stolen by the ghost of a serial killer who was aided by The Clackity, a creature that lives in the eerie old slaughterhouse. Evie and The Clackity strike a deal: she has one day to get through an impossible neighborhood of seven strange houses to save her aunt and overcome her anxiety in the process. On her quest, Evie will meet some strange beings, maybe make some new friends, and will learn that while the neighborhood has its own set of rules, some of them might just be in her favor.

The Nighthouse Keeper is the second book in the Blight Harbor Series. I’m not going to say much about it (because spoilers) but it is set to be released fall 2023, with book three coming fall 2024.

Some kids have a serious need for ghosts and monsters! Did you know that, for some kids, horror can be a calming genre? Check out these spooky (but not terrifying) middle grade horror books that are PERFECT for any kid who can't get enough scary stories.