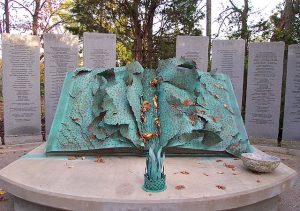 On January 27, we recognize International Holocaust Remembrance Day - a day in which we honor the six million Jewish Victims of the Holocaust and millions of other victims of Nazism. The Holocaust (which took place between 1933-1945) was the systematic murder of Jewish adults and children - an action which was carried out and sponsored by the Nazi government.

This year, the United Nations has announced that the theme for International Holocaust Remembrance Day is "Home and Belonging." When we think of this concept, so many of us think of our physical home - where we live and sleep. But a sense of home can be so much more than that. As a child, the library felt like a second home to me when I didn't feel that sense of belonging at school. Home can be the Earth, the country we live in, our town, and our neighborhood. It can also mean our families or our communities. Home can simply mean where we feel safe. No matter what their definition was, six million Jewish people were ripped from those homes during the Holocaust.

Much like many historical genocides, the Holocaust didn't start with just one person. Although Adolf Hitler was in power, there were 8.5 million other members of the Nazi Party, and many of them were directly involved or complicit in these crimes. The Holocaust was enabled because of fear and hate. When thinking about these victims, it's impossible not to note the rise in antisemitism in the past few years. From the Pittsburgh synagogue shooting to the sharp rise in antisemitic threats and vandalism on places of worship, the ADL (Anti-Defamation League) reported 2,717 incidents of assault, harassment and vandalism in 2021 alone. Social media sites like Facebook and Twitter are also seeing record levels of antisemitic memes and other hate speech.

Doug Emhoff (the second husband of the United States) recently spoke on the spike in antisemitism, and how we must stand up to hate now.

"Let me be clear. Words matter. People are no longer saying the quiet parts out loud, they are literally screaming them."

There's no way around it. Hate is one the rise, and the last few years might seem very familiar to many who lived during the Holocaust. Just like in those times, many marginalized groups are being targeted - the Black community, the LGBTQ+ community, the AAPI community, and many more. This year, along with honoring the victims of the Holocaust, we need to think about what our role could be in stopping the rise of hate in this country and around the world. In times like this, where we see an increase in bans on books like Maus, as well as other attempts at censorship, it's more important than ever to remember our past so that history won't repeat itself.