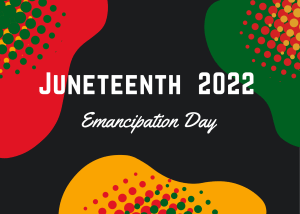 Juneteenth is a celebration of freedom. We use this day to remember the emancipation of enslaved African Americans in Galveston, Texas, who did not learn of their freedom until June 19, 1865, two and half years after the Emancipation Proclamation. Major General Gordon Granger prepared General Order Number 3 which ended legalized slavery in the state of Texas. The 13th Amendment to the Constitution abolished slavery in the United States.

A name combining the words ‘June’ and ‘Nineteenth,’ Juneteenth was initially celebrated primarily by Black Texans. Over the decades, the holiday was recognized and celebrated in states across the country. It is an occasion for communities to come together for barbeques, music, storytelling and festivals. It is also a time to learn the history of slavery and Reconstruction and to make efforts to bring about reparations. After years of advocacy by people such as activist Opal Lee and Representative Sheila Jackson Lee, the bill to make Juneteenth a federal holiday was signed into law by President Biden in 2021. Alameda County Library hopes you discover your own way to celebrate Juneteenth this year!

How to Celebrate Juneteenth throughout the Bay Area