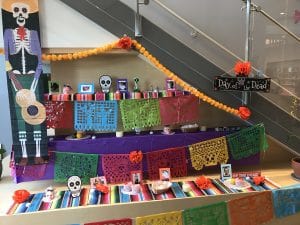 You have probably noticed some colorful yet macabre items popping up in the seasonal aisle at your local store. You may even have noticed some beautiful altars going up at your local library or school but what are they all about? Is Halloween going through a revamp?

No! These bright and colorful altars are for Día de los Muertos, a very traditional holiday in some corners of Mexico. Like Halloween, both holidays originate with ancient cultures, they both acknowledge that the veil between the living and the dead thins at this time of year, and both holidays involve some spooky details. While there are many similarities, there are also some key differences:

Halloween originated in Europe; according to most sources, Samhain (pronounced Sah-win) was a very important Celtic holiday. Over time, the name was changed to All Hallow’s Eve, then to Halloween. By contrast, Día de Muertos, as it’s known in some regions, has its origins with the Aztec people of Central Mexico.

Both Día de los Muertos and Halloween take place on or around the end of October and the beginning of November. This is because both the ancient Aztecs as well as the Celts in Europe had the belief that the “veil” dividing our living world from the world of the dead thinned out at this time of year, and that as a result, the souls of the dead could cross over into our world.

In ancient Mexico, people believed that their loved ones could cross over and visit, even if the living couldn’t exactly see them. Día de los Muertos therefore is still viewed as a joyful day to remember loved ones and celebrate their memory. Halloween, on the other hand, was a day for the ancient Celts to be extra careful. They were afraid that if the spirits of their deceased relatives could come back, so could anything, including such creatures as goblins, shape-shifters or even monsters.

These days, families who celebrate Day of the Dead decorate their altars with ofrendas, or offerings, such as foods that their relatives used to love. They place photographs and mementos throughout the altar in order to honor their loved one’s memory. Candles are lovingly placed on the altar to light the way for relatives looking to visit their family members in this world. There is nothing spooky or sinister about Día de los Muertos.

While modern day Pagans and Wiccans celebrate Samhain closer to the way it was originally intended, most people today treat Halloween as a day for parties, trick or treating and dressing up as their favorite characters. Very few people nowadays actually believe that an unruly ghost might show up, or that a demon could ruin their night. On the other hand, many people love the creepy aspect of Halloween; “haunted” houses and elaborate corn mazes are set to spook and delight folks of all ages.

For a deeper dive into ofrendas, take a look at our Ritual Objects of the Ofrenda Infographics here: 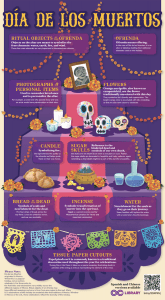 Interested in learning more about Día de los Muertos or celebrating Halloween? Check out some of these titles! 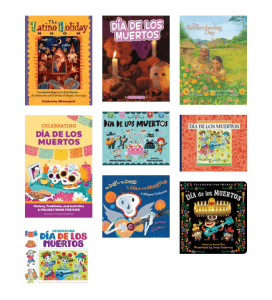 Wondering what Día de los Muertos is all about? How is it different from Halloween? Start with these titles to learn more about this traditional Mexican holiday. 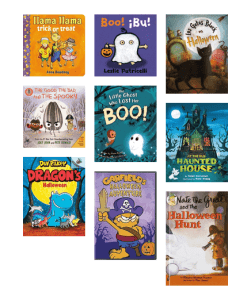 Some picks for your favorite spooky holiday! Ages-baby to teen/adult