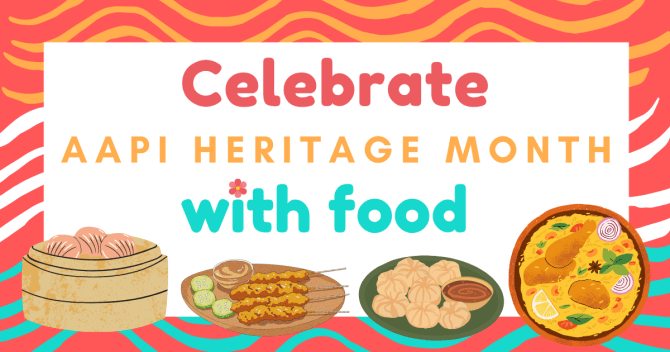 Food is a huge part of AAPI culture, especially sharing it with the people you love. To join in the celebration of AAPI Heritage Month, try a new recipe for an AAPI food, or support a local AAPI-owned restaurant. Need some inspiration? As we promised in our first AAPI Heritage Month blog post, here are some of AC library staff’s favorite AAPI foods! 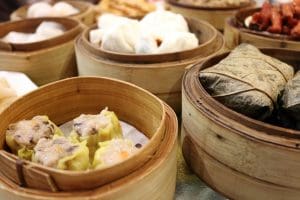 Dim sum originates from China and is made up of a collection of small dishes, traditionally eaten for brunch. There are so many kinds of dim sum dishes, you are sure to find one you enjoy! If you want something savory, get har gow (shrimp dumplings), shiumai (steamed pork dumplings), or Julia’s favorite wu gok, a deep-fried taro puff! For something sweet, order egg tarts or deep-fried sesame balls. If you want to be adventurous, be sure to try braised chicken feet!

Shabhaley translates to “meat bread” and is a Tibetan dish of seasoned beef and greens such as cabbage or bok choy, stuffed into dough and fried until golden brown. This delicious meat pie can be served with Tibetan hot sauce! 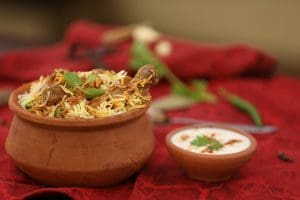 Divya loves to eat anything spicy, especially chicken or lamb biryani! Biryani comes from India and is a mixed rice dish filled with a delicious blend of spices, meat, and sometimes even potato and egg. Onions and yogurt are both common accompaniments for this savory dish.

Indonesian peanut sauce is a savory and spicy sauce made up of peanuts, water, tamarind pulp or lime juice, sambal oelek chili sauce, and palm sugar. If you want it extra spicy, you can even add Thai bird’s eye chilis! Melissa’s favorite way to eat this sauce is on Gado Gado, an Indonesian salad made up of cooked mixed vegetables and hard-boiled eggs. 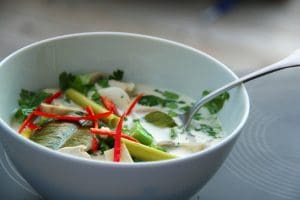 Caroline’s favorite AAPI food is tom kha soup. This Thai soup has a hot and sour flavor profile and is deliciously rich and creamy thanks to a combination of broth and coconut milk. The soup is flavored using aromatics like galangal, lemongrass, and makrut lime leaves, as well as tangy lime juice, and spicy bird’s eye chilis. The most common form of this soup is made with chicken and mushrooms, but there are versions that use other types of meat and vegetables as well.

Country of Origin: The Philippines

Pork Sinigang is a Filipino soup known for its savory and sour flavor. The signature sour flavor profile is most commonly achieved using tamarind, but some recipes might use other sour fruits including guavas, tomatoes, green mangoes, and pineapples. Try this soup over rice with a side of fish sauce filled with lots of chili peppers for some extra heat! 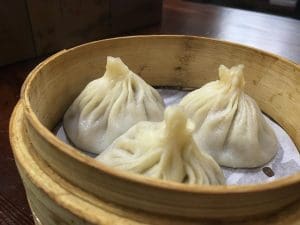 A food that Nick loves is xialongbao, also known as soup dumplings! This dish originates from Shanghai, which is why it is often referred to as Shanghai soup dumplings. What sets this type of dumpling apart from others is the rich broth that is found inside the bao when you take a bite! Soup dumplings are traditionally filled with pork, but nowadays you can also find soup dumplings filled with vegetables and seafood. Some popular dipping sauces that go along with soup dumplings include hot chili oil and Chinese black vinegar.

Want to try cooking with a wok? Apply to check-out an induction cooktop from your local library!

Check out the cookbooks on this list for even more AAPI cooking inspiration!

May is AAPI Heritage Month! Celebrate by trying out some new recipes using these amazing AAPI cookbooks.