The first library in Dublin opened on May 21, 1914 in the general store at the intersection of Dublin Blvd. and Donlon Way. The general store was sold in 1948 and the County bookmobile provided service to the community. It wasn’t until 1966 that a new permanent location was opened on the grounds of Dublin Elementary School. The library locations continued to grow in size under the direction of Mrs. Virginia Bennett with “Big Dublin” opening its doors at the Amador Valley location on March 1, 1970. “Big Dublin” served the community until the present day location opened in in its current facility in April 2003. Circulation now surpasses 500,000 items a year.

The present day library is located at the City of Dublin’s Civic Center. It is 38,100 square feet and includes dedicated areas for children and teens, public space for computer use, and quiet and group study areas.

There are two public meeting spaces, Community Room and Library Program Room, that are administered by the City of Dublin and can be rented by community members. Information about the rooms and questions regarding reservations can be made by calling the City of Dublin Parks and Recreation Department at 925 556-4500 during business hours.

The building also includes three pieces of public art. Click the thumbnails below to learn more about them. 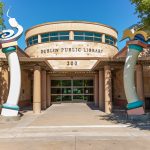 Know WayThis sculpture by Roger Ellison depicts two arching pillars framing the entrance of the Dublin Library. The pillar on the right side of the entrance has an open book on top. The pillar on the left side of the entrance has a spiral form and computer mouse on top. The sculpture is formed of steel and fiberglass and painted in a satin pastel color palate. Ellison, who died in September of 2012, has work on exhibit in both private collections and public spaces around the world, many of which are towering and weigh tons. Local placements include his “Sun Zone,” reminiscent of ice cream cones, at the entrance to the Sonoma County Administration Center; and “Bar Note Bench” at Sonoma State University’s Green Music Center. 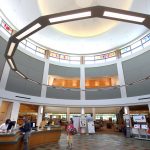 Seasons“Seasons”, a circular stained-glass window, can be found in the Dublin Library Rotunda. It was created by Peter Mollica who received his formal training making traditional Gothic Style stained glass windows. He has fabricated windows for the National Cathedral in Washington, D.C. and The Oakland Federal Building and has designed and fabricated work for west coast libraries, churches and homes. 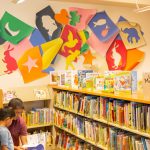 CutoutsMark Evans and Charley Brown each with a solo career are artists in their own right, but working together became known for turning flat walls into theatrical productions of kinetic energy. Found in the Children’s Section of the Dublin Library, “Cutouts” is such a piece with its pulsing color and fascinating rhythms.

The Dublin Library is an open, welcoming, family-friendly place, committed to enriching lives and creating opportunity through the love of reading, the joy of learning, and by engaging with people of all backgrounds to build an informed and thriving community. The Library’s friendly staff is ready to help you find and enjoy books, movies, music, and more!

Get a Library Card 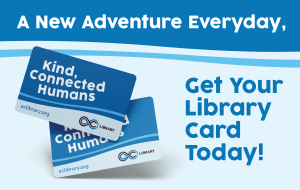